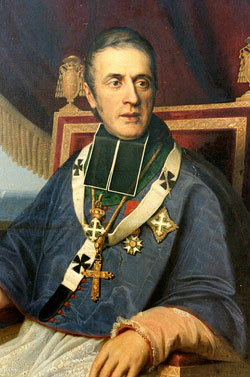 Eugene de Mazenod was born on August 1, 1782, at Aix-en-Provence in France. Early in life he experienced the upheaval of the French Revolution. None the less, he entered the seminary, and following ordination he returned to labor in Aix-en-Provence. That area had suffered greatly during the Revolution and was not really a safe place for a priest. Eugene directed his ministry toward the poorest of the poor. Others joined his labors, and became the nucleus of a religious community, the Missionaries of Provence. Later Eugene was named Bishop of Marseille. There he built churches, founded parishes, cared for his priests, and developed catechetics for the young. Later he founded the Oblates of Mary Immaculate, and in 1841 the Oblates sailed for missions in five continents. Pius XI said, “the Oblates are the specialists of difficult missions.” After a life dedicated to spreading the Good News, Eugene died on May 21, 1861. He was beatified by Pope Paul VI in 1975. His feast day is May 21.